Why farm? When the pay is minimal, the work is tough, and the conventional industry is fraught with exploitation, why would any child aspire to farming?

Alpha Sennon, founder/executive director of WHYFARM, believes we owe young people throughout the world an answer to this question.

"We can't wait until they get a PhD, learning about climate change and food security" before young people realize the importance of growing food, he said. "Farmers are aging. Who is going to grow food?" 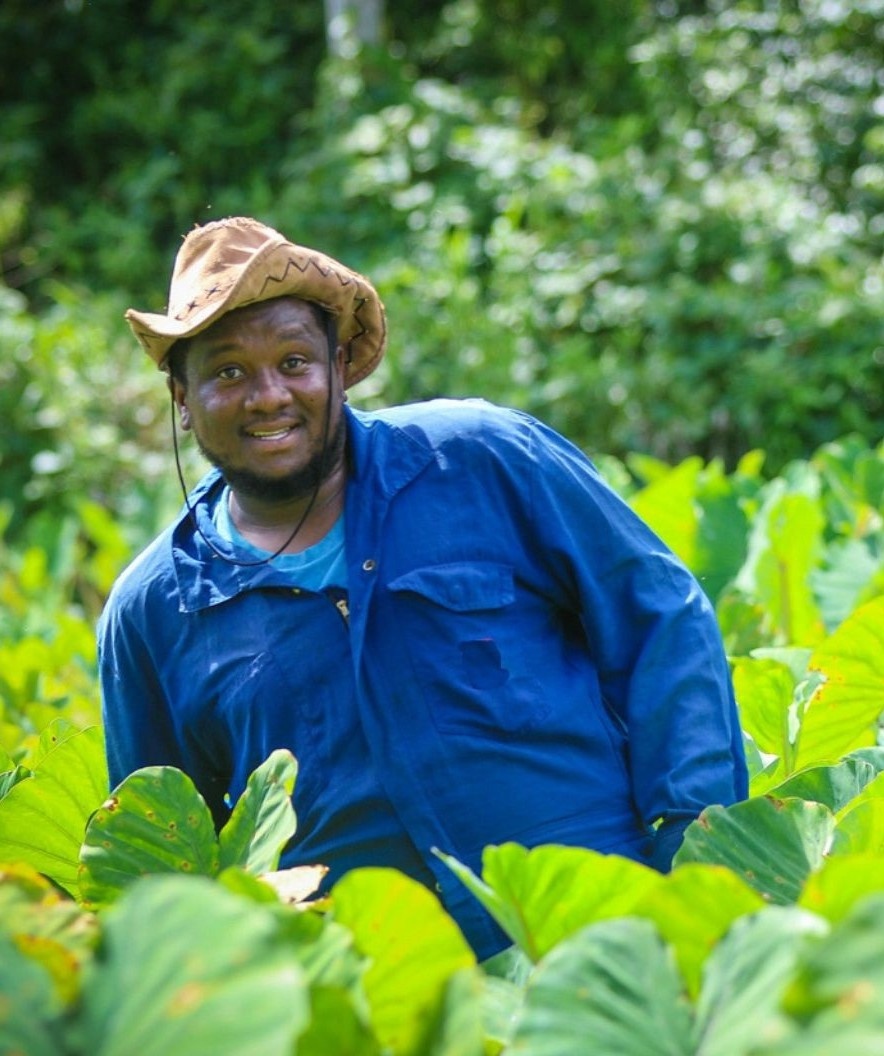 Alpha originated the initiative in his rural home of Siparia, in the Republic of Trinidad and Tobago, where the average age of farmers is 55.

WHYFARM intends to transform the stigma associated with farming into scientific curiosity, informed engagement, and entrepreneurial opportunities for youth.

By creatively engaging children from birth to age 12, as well as youth ages 13-30, WHYFARM helps them develop their own understanding of food security, commitment to climate justice, and motivation to choose regenerative farming as a livelihood.

Ultimately, the organization aims to address the pressing question of who will feed the world in 2050.

As a pioneer in what Alpha coined "agricultural educational entertainment," he has adopted a communications strategy from the arts with a proven track record for engaging young audiences: the superhero genre. "The world already had Batman and Superman and Spiderman," fighting their specific battles. "I really loved Captain Planet" as a child, he explained. "I thought, 'now we need one for agriculture.'"

In 2015, Alpha conjured AgriMan, the world's first food and nutrition superhero. Eventually a sidekick named PhotosyntheSista and others came along. Youth interact with characters of this agriverse in song, theatre, poetry and spoken word, alphabet charts, video, and animation. They also occasionally meet the leafy-green-customed AgriMan live at schools and events. In turn, AgriMan (aka "the world's most powerful food provider") delivers the goods with unabashed, rhythmic messaging:

"Boys and girls, I'm the AgriMan.

To feed the world is my master plan.

If you plant one tree you can eat for free.

This will guarantee food security." –AgriMan

Young minds are "conditioned by music, TV, movies, books," he explained. "Art is the highest form of communication" in all cultures. If there is any chance of introducing the "why" of agriculture to children, he said, it is going to be by creative means.

In his quest to rebrand farming as the "cool" vocation, Alpha and his team at WHYFARM have populated the lexicon of early agriculture education in no uncertain terms. He peppers conversation with words like agricoolture, agriedutainment, agricreativity, and agripreneurship as if they are already universal. Indeed, things are moving in that direction. AgriMan interactive materials have been translated into multiple languages and adopted by program partners in the Caribbean and Africa. TEDxAmsterdam featured Alpha's story of AgriMan in 2017. The first edition of the comic book is also available for digital purchase on Kindle. "The dream is really big," Alpha explained. "We hope to be in all languages of the world." In addition to childhood-centered activities, WHYFARM also works with teenagers and young adults to address microeconomic issues such as youth unemployment and agriculture underemployment by engaging them in food-growing education and connecting them to employers.

The Food and Agriculture Organization of the United Nations (FAO) celebrates WHYFARM on its youth engagement website pages. Global Innovation Exchange lists the organization as a model in social enterprise. WHYFARM has also been selected by the Bill & Melinda Gates Foundation as one of 15 winners of the Misk Global Challenge in 2018. Despite these accolades and others, and like most nonprofits working in food systems, Alpha notes that WHYFARM initiatives are slowed only by limited financial capacity.

Alpha says he spent his childhood running away from agriculture. "I grew up asking, 'Why do we have to grow our own food?'" His father worked in the nation's prominent oil industry and his mother in the childcare and geriatric care field. Together they raised their family on a hobby farm—not as a business but to feed themselves and share with neighbors. "Our chores were in the garden and I've yet to meet a child who really loves chores," he laughed.

"I didn't see any money being made," he explained. Alpha said it never occurred to him that farming could be a viable profession. Young people like him were encouraged to go into medicine or law. "No one was talking about being a farmer."

Alpha's own higher education journey didn't start well. He began in math, moved on to physics, and tried information technology for a while. It wasn't until a college dean suggested he look into the study of agribusiness that he found his way from being "an F student to valedictorian" of his department at the University of the West Indies. He majored in agribusiness, minored in both extension communications and entrepreneurship, and is working on a master of philosophy in agricultural extension. Today his focus lies in the rebranding and marketing of agriculture in the Caribbean region. "I went from zero to hero," he laughed. It is a phrase he says he shares often with youth.

"Have no fear, AgriMan is here.

Hunger and malnutrition shall disappear." –AgriMan

Playful and jovial though he may be, Alpha's mission is rooted in humanity's horrendous acts and histories. In a 2019 "Face of Food" podcast broadcast by EAT, Alpha remarked, "I often speak of food freedom, because a lot of people in the Caribbean still thinks that farming is slavery."

"But he who feeds you controls you, and now, at this point of time, if you are not feeding yourself today, then maybe you are still being enslaved."