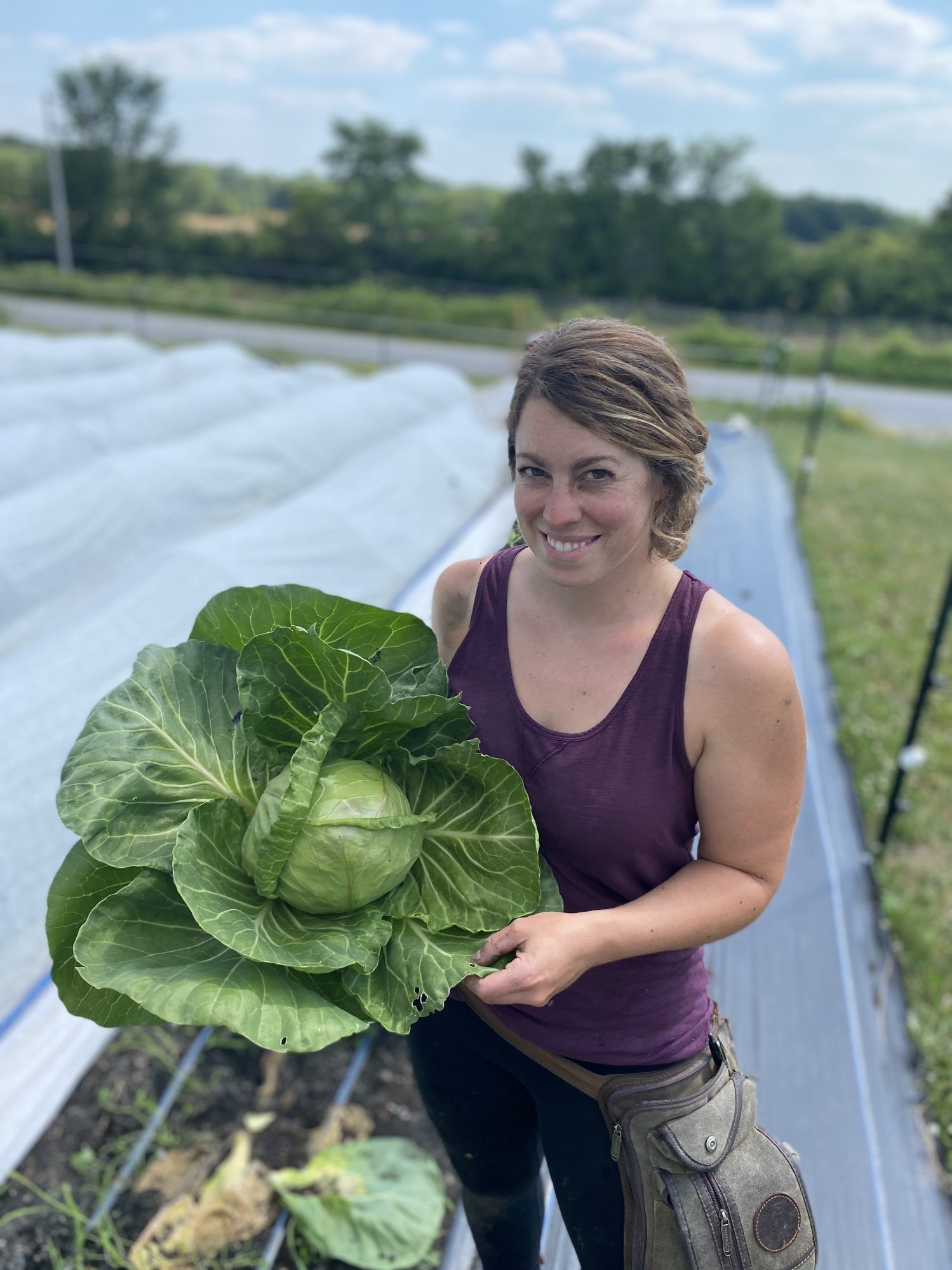 "There is a choice to be made," she explains.

"To be an activist," as well as a farmer, means "to go beyond growing food."

Anne Massie is a farmer in Crown Point, Indiana. She grows sixty varieties of fruits, vegetables, and nuts, but cabbages are her favorite. "Prehistoric monster flowers," she calls them.

Anne is also a local food activist for whom thinking big does not stop at large, leafy brassicas.

"There is a choice to be made," she explains. "To be an activist," as well as a farmer, means "to go beyond growing food."

As members of the Northwest Indiana (NWI) Food Council, Anne and her colleagues have made the collective choice to go that extra mile. Since their start five years ago, they've pooled their energies without pause. "We hit the lottery of board members," she says. "(We) are all active, curious people."

Together they have grown a monumental trifecta of funded opportunities to support their local and regional food systems. Specifically, the NWI Food Council was awarded all three multi-year grants for which they applied in 2018: the USDA's Farmers Market Promotion Program for developing farmers markets in highly food insecure communities of Gary and East Chicago, Indiana; the Local Food Promotion Program for hiring value chain coordinators to assist farmers trying to scale up and get into wholesale markets; and a smaller private foundation grant for a small-scale farm tool and seed library. The awards totaled more than $1 million to cover programming through 2022.

And they did it all as volunteers.

"We threw everything at the wall to see what would stick and it all stuck." she says. They were elated. "At the same time, we were, like, holy shit."

Though they are a group accustomed to incremental success stories, the year 2019 came with its share of growing pains for a group with no nonprofit management experience among them. "We've made tremendous progress and learned a lot since then," Anne notes. With the awards, they hired three part-time program managers, (one being a part-time value chain coordinator), and "of course" they contracted a bookkeeper. But to this day, she notes, the administrative functions of the NWI Food Council remain an all-volunteer effort.

"We're approaching burnout for sure," Anne notes. "But we've buckled down this year to build capacity." She says they hope to hire a part-time administrator next year. It's work they do diligently, despite all challenges, including COVID-19. "Our meetings are all outside now. We wear masks," she says.

To understand the success of the NWI Food Council, it's important to look back. The Council found success by building a network of mostly small-scale farmers seeking to gain a foothold within the Rust Belt's enormous agricultural sector. In this portion of the Midwest, Anne explains, farming is defined as "commodity crops and monocultures." There is a "lack of awareness of how highly productive you can be on a small-scale farm," she says. In Indiana, "we're seen as hobby farmers."

The growing conditions are good in Indiana, Anne points out. "Soil is fertile, we have plenty of fresh water," and the massive markets of Chicago are just around the bend, she says. "But we were invisible," she explains. In their highly industrial area, few people knew they were there. They couldn't compete.

As their network evolved, they gained multi-sector stakeholders to help them gain visibility and access to markets. Where markets didn't exist, they created new ones. They established farmers markets, restaurant sales, CSAs and – upon this writing -- the Council is in conversation with a grocery store chain. Sales opportunities grew, as did their farming community. Indeed, 25 of the 30 farmers involved are considered beginning farmers.

The NWI Food Council leads with its values, says Anne. This includes the encouragement of regenerative practices and overall transparency. Given the socioeconomic disparities of their community, food security is also a high priority. There are 21 self-identified food deserts" within the Gary area, she explains.

"We're extremely proud that we're approaching food policy from the point of view of farmers," she notes, "and, at the same time, addressing food access."

Perhaps most telling is the NWI Food Council's commitment to honest reflection. Each year they bring in a consultant to lead them through the hard truths of their efforts and challenge themselves to pivot, prune, and improve. This year, they took the time to become better storytellers, with support from the Food and Farm Communications Fund. "Community education was really spreading us thin," says Anne. Storytelling will allow them to streamline.

For Anne, the work she does with the Council has not translated into personal economic gain. Rather, she says, she has future generations in mind. She is the mother of an 8-year-old and a 2-year-old; clearly her priorities. This is a long game for her.

The first spark occurred in her senior year of college at Kalamazoo College in 2009 when Will Allen of Growing Power in Milwaukee, WI, appeared as a speaker. "As a young, white woman of privilege from the suburbs," she says, "it was sort of an evolution for me." The intersections of food systems work started connecting in her mind around issues that mattered to her: immigration rights, social justice, food security, environmental concerns, climate change. Anne had been studying psychology and philosophy, intending to apply to law school. As she became familiar with the work of Mr. Allen and others, however, she realized she "didn't need to pick one social justice issue over another."

After college, Anne threw herself into what she describes as a self-led "crash course" in America's modern food system and its failures. She started volunteering at farmers markets and for small farms, and growing food for barter. The ability to find paid work in food systems remained elusive. She became a market grower instead.

Food policy work has rekindled interests in Anne; perhaps law school will appear in her horizon again. In the meantime, she says, she is focused on creating stable employment opportunities for others within her community's food system. "We've employed three people with jobs that didn't exist before" she says pragmatically.

And what could be more Rust Belt Midwestern than that?