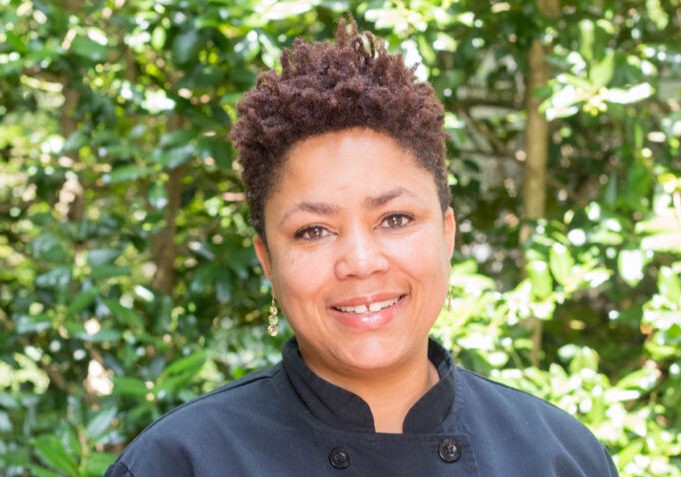 "I want to increase the ability of daycares in the poorest neighborhoods to purchase and consume the highest quality, farm-fresh produce ... and have it delivered to them," she says, with an emphasis on "delivered."

If you know anything about the good food movement in and around Atlanta, GA, you've likely heard of Chef Asata Reid. If not, chances are, your kids or your grandkids have.

Chef Asata, MPH, MS Ed, is a formally trained culinarian, a community health educator, a writer and storyteller, an activist, and a highly sought speaker throughout the Southeast. She has made it her life's calling to teach basic cooking skills and accessible nutrition to people across the demographic spectrum, in all stages of life.

In addition to her work with Kaiser Permanente for more than 14 years, Chef Asata is also a co-founder of The Cooking School at Irwin Street and a collaborator with some of the most cutting edge farm-to-school/food access/food justice initiatives in Georgia. These include the Small Bites Adventure Club, the Georgia Organics Turnip the Volume videos, the Foodwell Alliance blog, the Captain Planet's Cook, Eat, Sprout Kids' Virtual Cooking Camp, the Atlanta Eats series, and Michelle Obama's Chefs Move to School program.

When COVID-19 brought in-person education to a grinding halt, Chef Asata pivoted to virtual teaching and wrote a self-published book, all while co-parenting her own school-age kids through the pandemic.

How to Feed a Kid: A Parent's Guide (January 2021) is full of hard, helpful truths such as "You've been duped into believing you can't feed yourself and your family so that other people can make money off of you" (p. 96). A longer passage about toddlers gets at the book's core:

... the more parents know about the nutritional needs of their kids, the more likely they are to choose healthier snack options and push back against peer pressure from cupcake loving parents who ask 'What's the big deal?' The big deal being if teachers are rewarding kids with sugary snacks, and every celebration features sugary snacks, and all manner of life events from vaccinations to birthday parties to Saturday morning pancakes are all punctuated with sugary snacks, you can see pretty easily that we're looking at a major sugar dilemma. One that is tied to an exponential surge in metabolic syndrome and the 86 million pre-diabetics that are on the precipice of a massive national health crisis. But let's get back to these toddlers. (p. 83)

The book, videos, classes and camps, speeches, collaborations and consultations: Chef Asata says it's all just the beginning. She's building an arsenal of equity tools with which she has much bigger plans.

Specifically, she says, she wants to substantially grow the good-food purchasing capacity of the early childhood education (ECE) industry. And she plans to start in Atlanta's communities located "in specific zip codes, south of I-20" where most of the ECE facilities are small, independent, sometimes home-based businesses run by women of color, for mothers of color.

"I want to increase the ability of daycares in the poorest neighborhoods to purchase and consume the highest quality, farm-fresh produce ... and have it delivered to them," she says, with an emphasis on "delivered."

"Most of these women don't have access to farmers, don't know farmers, or how to purchase food from them," she notes. "These ECEs are all very different ... they're putting out a lot of fires having a hard time just trying to find enough staff ... and many are focused on radicalized improvement for their children and their communities." She points out that by centering fresh food procurement in racial justice, this also becomes a strong marketing tool for daycares, farmers, and allied purveyors. Chef Asata envisions starting with as many as 200 ECEs with shared interests in the pilot.

"These are communities of refugees and immigrants. These are women that the communities trust to raise their kids while they go to work, sometimes through the night ... Cooperatively they can afford fresh local produce, and also incorporate food as a learning medium."

"What we're talking about is food literacy," she explains, noting the importance of working with children and their caregivers from infancy. "Lessons at this stage will stay with them for life."

To describe the fuel that keeps her going, Chef Asata shares her own good-food story, which, she says, has a different trajectory than many assume. She was in college, studying broadcast journalism at Florida A&M University when she discovered Food Network. "For the first time, I saw food the way that I wanted to talk about it." Her parents refused to let her quit college to attend culinary school, so she finished college first, and then attended the International Culinary School of the Arts Institute of Atlanta, where she graduated with honors. That path led quickly to a career in haute cuisine, in which she was steeped for 10 years, working for Atlanta's hottest restaurateurs of the time, including Chef Cheri Davis of Dish.

"Shrimp would show up on ice, right from Savannah," she says, "microgreens, Bull's Blood beets, snapper with heads and eyes, elegant, perfect" ingredients. "That's what I knew as food."

Chef Asata cooked for a decade in the "Alice Waters–influenced" industry before starting a family. She remembers being "very pregnant" when she and her husband were down to one income, going to Walmart for groceries, and "seeing just stuff literally stocked to the roof, people buying things in boxes and packages, nothing like I had come to know as food."

That's when a voice spoke to her so loudly, she says, that she turned to see who'd said it: "But you can show them how." In that moment, the soon-to-be mother decided to make a career shift from epicure to educator. "I don't write fancy recipes anymore," she explains. "Not because I can't, but because that's not my calling. I came from the farm-to-table world, but that's nirvana, that's not how people live."

Chef Asata has since earned a masters of public health at Emory University's Rollins School of Public Health, where she completed her thesis on the complexities of picky eating. She also earned a masters of science in education from the University of Kansas, where she developed a plan for integrating health and nutrition into PreK to 5th grade STEAM curriculum. "I understand food at a scientific level and a soul level."

"When I talk to people about their food and their nutrition, I'm going to also explain how and why this will impact their body. 'You just need to eat less and exercise more,' is the worst advice ever," she says. "It's culturally blind, monochromatic, genderless, disgusting advice ... For every person out there struggling, that's why I keep on coming out."

Chef Asata has long held reverence for farmers who grow food for the community. She wants to use her farm connections to reclaim ways of cooking and eating that benefit growers and consumers alike. "People think [seasonal cooking] is time consuming and expensive and complicated with weird ingredients, and it's just not," she insists.

"When a parent runs me down in the parking lot [asking], 'how did you get him to eat squash?' that parent has been transformed." And that, she points out, is the movement.