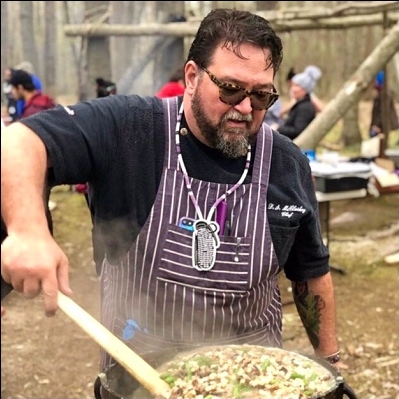 "In America, we're always cooking someone else's food – Chinese, French, Italian. We do this without having lived in those places and often without even knowing people who live in those places," he says. It's still rooted in extraction, he points out, in the "gluttonous ways that lord one culture over another."

When Chef Dave Smoke McCluskey tells you that moose nose and beaver tail are similar in flavor, he's not just talking about taste. As a chef, he wants you to enjoy your meal, of course. As an Indigenous foods educator and member of the Mohawk Nation, Chef Dave also wants you to think about the history of the ingredients in your meal, including those "originating from these stolen, so-called-American lands."

Chef Dave is a grizzly man with a scientist's mind and a pirate's mouth. He's got 40 years in the culinary industry, a career composed of little formal training, dozens of restaurants, hundreds of catering gigs, and boundless curiosity. His quest for perfection on the palate stems from one simple yet elusive question of his peoples' past: "What has been lost?"

"It's not just about the genocide and ethnic cleansing that was perpetuated against us. It's about the loss of foodways the totality of what was taken," he says. "What did our ancestors eat. Why did they cook the way they cooked?"

"What is that bacon in your beans replacing?" he asks. "Was it bear? Turkey? Hazelnut oil?"

Chef Dave is a prodigious reader when he's not cooking. He scours esoteric histories and scientific texts for clues that shed light about lost foodways on the North American continent. While he currently lives in the Savannah River region of upstate South Carolina, his focus is Akwesasne, the lands that straddle the border between Ontario, Quebec, and New York State, where his family is from. "Being Indigenous in this country means that parts of your culture are locked away in boxes and museums that another culture holds the keys to."

The topic of fat specifically piques his interest. "When you remove cultural fats," he explains, "you end up with fat substitutes, like lard, which just aren't as healthy as bear fat or duck fat."

"There's a difference in the way that Indigenous folks used fat, as a flavor," he says. "It wasn't about massive amounts of meat fried or sautéed, like in your Western cuisine. We use pork now for our substitute fat. We've substituted it to make up for what's missing That's what chefs do. We improvise." But in the process of improvising, he wants to know, what's gone missing? What environmental harm has been perpetuated by a monoculture of hog? What wild foraged nutrients are now deficient in our bodies, and what has that done to our brains? What flavors have been forgotten? What inequities were created when modern agriculture replaced matriarchal growing, preserving, storage and cooking traditions? And how is humanity worse off for it? "You have to look at pre- and post-contact, pre- and post-reservation" histories to understand where and when those losses and changes occurred, he says.

Chef Dave's ancestors, the Kanyen'keha:ka, were farmers as well as hunters and foragers. Living about as far north as corn could grow, they practiced their own version of the "Three Sisters," a companion planting system of squash, corn, and beans that had migrated from the Mesopotamic South. Chef Dave has been studying the Three Sisters system for more than 25 years, and still, he says, there is knowledge to rediscover and reclaim.

Nixtamalization is one of the foodways arising from the Three Sisters, and Chef Dave is determined to expand this practice into the mainstream U.S. culinary industry. This process of "washing" corn in an alkaline solution of hardwood ash and water removes the outer shell, the pericarp, of the kernel, making corn more digestible, he said. In places like Mexico, for example, nixtamalized corn is used to make masa; among the Mohawk people of the Northeast, nixtamalized corn is used in soups, grits/mush, cornbread, and stews. The process makes the grain's vitamins, including niacin, and minerals bioavailable to humans. It also removes 97-99% of the mycotoxins from corn that has sundried in a field. "Indigenous people knew" he says, and then provides a half dozen examples in which this sustenance was both food and medicine.

Through a movement he calls "Corn Mafia," Chef Dave is currently working alongside seed savers and growers, and in partnership with The Congaree Milling Company, to nixtamalize and coarsely grind hominy grits for sale to chefs and specialty stores. His new products—Longhouse Hominy Grits and Lyeing Mohawk Masa—are shelf stable, a tribute to Mohawk corn storage traditions. A portion of sales benefits the Alliance of Native Seedkeepers.

Chef Dave is also interested in the possibility of Indigenous people having used post-harvest plant material, such as corn stalks and bean pods from shucking, rather than (or in addition to) hardwood, to nixtamalize. He notes that when a tribal village of as many as 1,000 people would put up three to five years of food in storage, it would require several miles of corn, beans, and squash in cultivation. Anyone who's grown these crops knows the vast quantities of leaves, stems, and husks left over from the harvest. Surely, he says, this biomass was put to use; he is conducting his own experiments to recreate such possibilities.

In his pursuits, Chef Dave occasionally finds himself at odds with fellow Indigenous cooks. As a chef, he says, he refuses to accept that many of the Indigenous foods were as basic as they are presented to be. He believes there was more artistry to it, and certainly more taste. "The impromptu meals when our people were foraging and hunting ... lent creative opportunities to include many different flavors. I just can't believe it was bland." He talks about his own flavorful recipe for "Warrior Mush," a porridge of ground bear jerky, dried blueberries, a little fat, and hominy grits that were often carried in a leather pouch while traveling.

Chef Dave was born in Syracuse, NY, capital of the Haudenenosaunee, and spent his youthful summers west of Albany, in and around the Mohawk Valley, ancestral homelands of the Mohawk. His ties are to Akwesasne grandparents. His grandmother, an educator, introduced him to Mohawk traditions despite his grandfather's reluctance to subject young Dave to ubiquitous discrimination. Chef Dave started earning his culinary chops as a dishwasher at age 12, at a "brutal, boy-centric, high-end restaurant" for tourists on Cape Cod, MA, where he grew up. It was an environment that his wife describes as Lord of the Flies, where getting slapped upside the head by the person in charge was par for the course.

He speaks fondly of those twisted years, and of subsequent culinary experiences that provided him with the skills and wherewithal to cook traditional foods from throughout the world. But the irony of his being a chef in the United States is not lost on him.

"In America, we're always cooking someone else's food – Chinese, French, Italian. We do this without having lived in those places and often without even knowing people who live in those places," he says. It's still rooted in extraction, he points out, in the "gluttonous ways that lord one culture over another."

Chef Dave gets quiet for a few seconds. And then he concludes: "Decolonization can't be about replacing lost foodways," says Chef Dave. "Food justice will be about Mohawk people revitalizing Mohawk food."