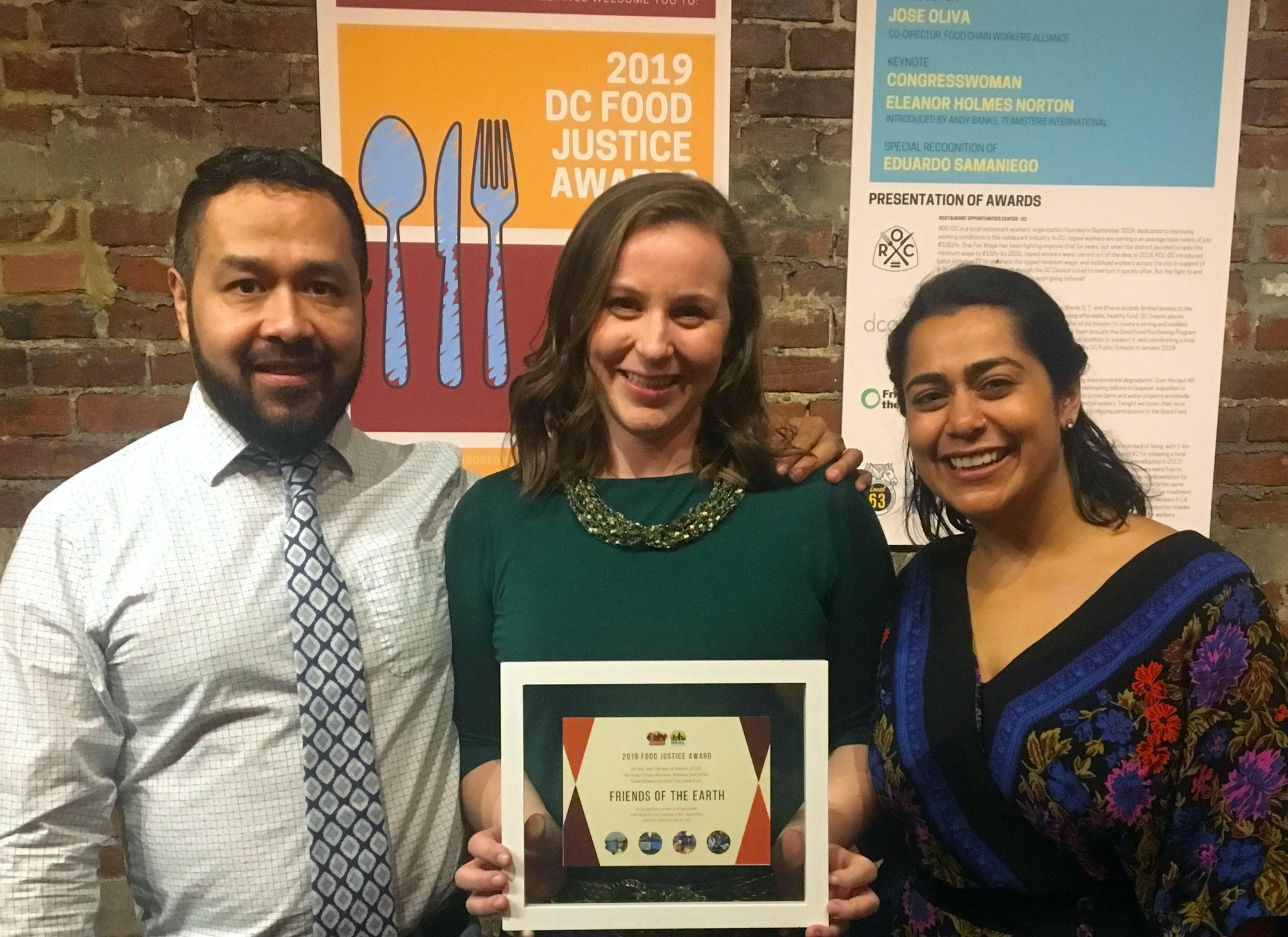 In the photo above, Chloë Waterman (center) accepts a DC Food Justice Award on behalf of Friends of the Earth.

This is a refrain that Chloë came back to again and again in our interview: where there is injustice in food  systems, she is going to act.
"We need to show at least a semblance of gratitude to the people growing our food by assuring them legal protections," she insisted.

During the summer of 2020, as food supply chains quaked under the pressures of COVID-19, Chloë Waterman did what comes naturally to her. She helped organize a David-vs-Goliath-style campaign targeting Tyson Foods for failing to protect its meat plant workers.

As program manager for Friends of the Earth, Chloë collaborated with more than 120 organizational partners to drive the timely campaign. Together, they represented tens of thousands of workers and advocates. They Zoomed, they networked, they strategized. During Campaign Week, July 6–10, 2020, their message was simple but firm. They demanded mandatory, COVID-specific safety protections and standards for workers at Tyson's chicken, pork, and beef processing facilities.

Media outlets throughout the country covered the story of the campaign. Organizing partners collectively reached out to potentially millions of followers via social media. As of that week, 25 Tyson meat plant workers had already died from the coronavirus.

"In the end, we didn't get any concessions from Tyson," Chloë noted, emphasizing "that we ultimately need the government to step in to protect workers and the environment."

"People have to constantly pressure the government to put policies and regulations in place," both federally and at the state levels. "Corporations are not going to do the right thing on their own."

This is a refrain that Chloë came back to again and again in our interview: where there is injustice in food systems, she is going to act. "We need to show at least a semblance of gratitude to the people growing our food by assuring them legal protections," she insisted.

Chloë described the Tyson campaign as only one point along a complex continuum of advocacy actions she coordinates in her role with Friends of the Earth. Racial inequities, lack of minimum pay and sick leave laws, migrant worker exploitation, public health concerns, lack of animal welfare protections, unfair producer contracts, climate change—all are issues exacerbated by the conditions of factory farming, she said.

A more just food system is always her goal, she said. "Building grassroots momentum for policy action" is her method.

Most good-food activists have an origin story, that turning point when looking away is no longer an option. But most don't have it happen as early in life as it did for Chloë.

Chloe was in 2nd grade on a "colonial-village-type" field trip on the outskirts of her hometown, Bloomington, IN. There, the staff slaughtered a pig as an educational experience for her class. She hasn't eaten meat since not even "chili from a can," which had been her favorite meal until that formative day.

"I was a very early animal welfare activist," she explained. "I did my 6th-grade science project on vivisection." She remembered early actions she took, like returning Crest toothpaste to Proctor & Gamble with a letter letting them know she would never buy animal-tested toothpaste again. This concern-to-action lifestyle has been her norm ever since. "When I go back home to Indiana and meet up with high school friends who ask what I do for a living," they're never surprised, she laughed.

Prior to her work with Friends of the Earth, Chloë served as the senior manager of state legislative strategy for the American Society of the Prevention of Cruelty to Animals (ASPCA). There she successfully lobbied for a wide range of animal protection legislation, including "cracking down on sales of puppies from cruel puppy mills and stopping legislation to prevent whistleblowers on factory farms."

"Animals have always been easy for me to sympathize with, but I wanted to address the suffering of people in my work as well," she noted, explaining why she came to work at Friends of the Earth. Over the last several years working alongside farmworker advocacy groups, environmental justice advocates, and other allies, Chloe said she has been readily exposed to the rampant human suffering associated with animal agriculture. She is particularly moved by the "children of workers in the movement, organizing on behalf of their parents who sometimes can't (or aren't allowed to) organize for themselves."

"What's holding us back from a transition toward justice," she said, is food grown and sold inexpensively because "it's done on the backs of Black and Brown workers and at the expense of the environment and animals." For Chloë, ending factory farming is crucial to solving the most pressing crises of our time, around racial justice, public health, and climate change.

"Sometimes, we can be too quick to pit farmers as the enemy" of sustainability, she said. "But that's just not accurate. Most farmers care deeply for their animals." While Chloë avoids consuming animal products herself, her work helps advance regenerative, higher welfare, small-scale meat farming along with the promotion of plant-forward diets. She said most of the farmers she meets also favor moving away from the factory farm model.

In order to make advancements in policies and standards, Chloë said that voices from throughout a more diverse cross-section of America need to be represented. "Just working within our lane doesn't work. The movements for climate, labor, civil rights, and animals are all strengthened by working together."

"We need to defer and rely on those working on the ground."

Despite the enormity of the projects she takes on, Chloe is still a young professional, not far removed from her undergraduate years at Lewis & Clark College in Portland, OR, where she studied philosophy and environmental studies. She recently completed a graduate degree in economics at the University of Maryland. Her father, a retired economics-professor-turned-farmer, inspired her to apply an economic lens to the goal of transitioning away from factory farming.

"Ultimately, we need both moral and economic arguments to win, and I wanted to be able to make both," she added.